BLOG: “Willing and waiting to help” nurses in the Qikiqtani Region reflect on their jobs

BLOG: “Willing and waiting to help” nurses in the Qikiqtani Region reflect on their jobs

Now, more than ever, is a time to celebrate and appreciate the nurses who care for us when we are unwell. We spoke to three nurses from the Qikiqtani Region about their work for Nursing Week 2020.

For as long as she can remember, Nubiya Enuaraq wanted to become a nurse. She was inspired by her aunt who worked as an Interpreter/Translator at the local Health Center in Clyde River.

“I wanted to be one of the people who are willing and waiting to help,” explains Enuaraq, “that is what motivates me to take care of people to connect with them at their most joyful times and at their most vulnerable times.” 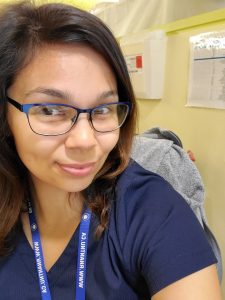 She says that working in a close-knit community is one of the challenging aspects of nursing.

“Not knowing who might come through the back door, it could be my sister, my aunt, a friend, or cousin, this reality makes my heart jump a little.”

Taking care of those in need is important for Enuaraq, she often reminds her son to look for the people who are always willing to help in the community.

Since graduating from the Nunavut Nursing Program in 2017, Enuaraq worked in a variety of departments at the Qikitani General Hospital (QGH) in Iqaluit.

There is never a dull moment working at an out-patient clinic and the in-patient unit. This is something Rebecca Lonsdale realized on the job at the Qikqitani General Hospital as a new nurse in 2006. What started as a routine patient call became an experience of a life time minutes later when Lonsdale single-handedly delivered a baby.

“From a place of gratitude, I’ll remember this day for the rest of my life,” she reflects, “I had run into this family much later on, and thought ‘you’re that baby who was in such a hurry to be born!’” 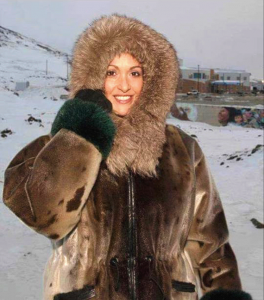 It’s moments like this that make it all worth it for Rebecca who says she became a nurse to help and serve others. Moments like this help balance the physical and emotional exhaustion that comes with helping patients and their families recover from trauma.

“The hope that I carry in my heart is for the health systems to improve and evolve for Inuit and remote communities,” she says.

“The positive impact that a nurse can have for people can be small or it can be tremendous,” she adds.

The COVID-19 pandemic has been a game changer for health care professionals and a lot of people are showing their respect. Last month, RCMP, by-law officers, firefighters and other first responders gathered at the Qikiqtani General Hospital to show their support. Asenath Idlout, a nurse since 2004, was one of the people working there at the time.

“Seeing that parade of first responders saying thank you, that just makes you want to work more,” she says, “I felt humbled and proud, it was amazing!” 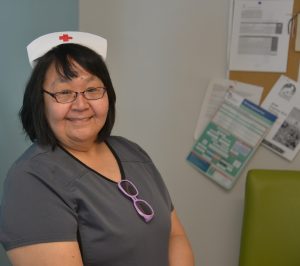 Idlout has been receiving a lot of compliments and gratitude from people during National Nurses Week, she says the feedback is helping her carry on with her work during this challenging time.