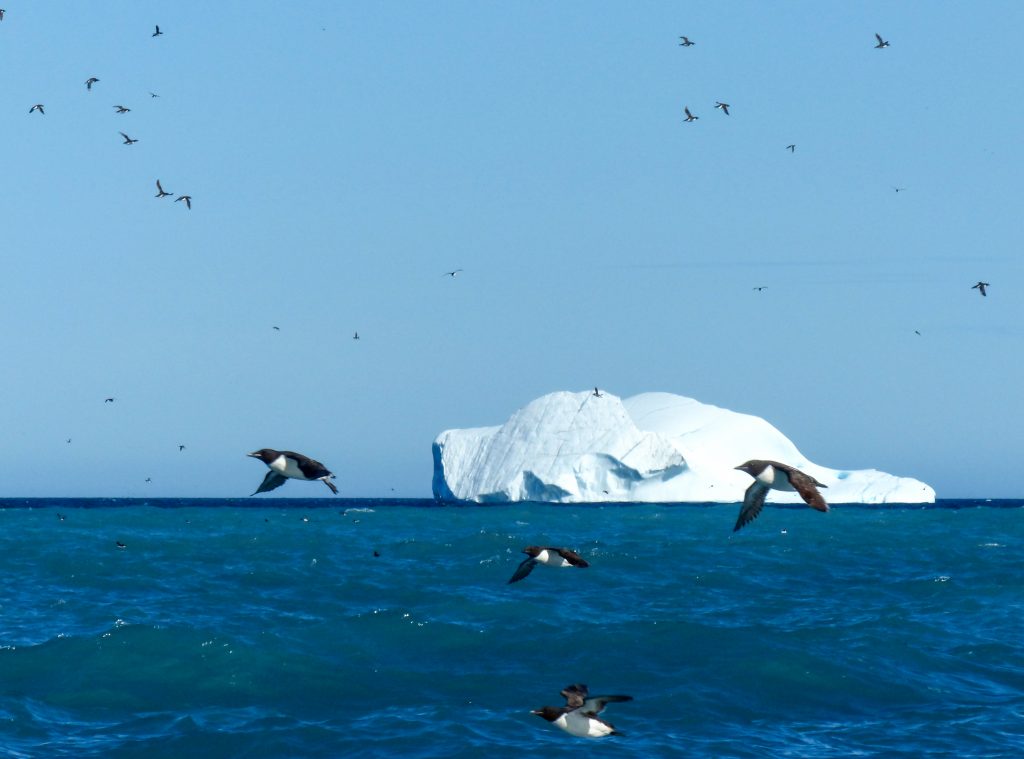 Canada’s North is a vast area of pristine ocean and land that has been part of the traditional Inuit homeland since time immemorial. It is also home to a rich abundance of whales, polar bears, and migrating birds. Climate change and human activity are affecting the landscape and the traditional way of life in the Arctic, and humanity has a duty to protect them.

Today, Minister of Environment and Climate Change and Minister responsible for Parks Canada, Catherine McKenna, along with Joe Savikataaq, Nunavut’s Minister of Environment, and Mr. P.J. Akeeagok, President of the Qikiqtani Inuit Association, announced an agreement on the final boundary of a national marine conservation area (NMCA) in Tallurutiup Imanga/Lancaster Sound.

A section of Tallurutiup Imanga/Lancaster Sound twice the size of Nova Scotia will be protected, making it the largest marine conservation area in Canada.

Today’s announcement is the culmination of years of tireless work by Nunavut Inuit and different levels of government. In partnership with the Qikiqtani Inuit Association and the Government of Nunavut, the Government of Canada is taking a significant step to create a legacy for future generations. The protection of Tallurutiup Imanga/Lancaster Sound as a national marine conservation area is a model of collaboration and a shared accomplishment. This agreement launches the negotiation of an Inuit Impact Benefit Agreement (IIBA) that will provide long lasting benefits for Inuit who have deep roots in the region. The agreement also confirms a moratorium on future offshore oil and gas exploration and development.

This conservation area will protect Inuit harvesting rights guaranteed under the Nunavut agreement and ensure the protection of species at risk.

The Government of Canada is committed to expanding its network of protected areas and protecting Canada’s biodiversity. The agreed boundary of Tallurutiup Imanga/Lancaster Sound will contribute approximately two per cent on an interim basis towards the government of Canada’s commitment to protect five percent of Canada’s marine areas by 2017. Upon the signing of the Inuit Impact Benefit Agreement, this conservation area will contribute greatly towards Canada’s international commitments to the United Nations Convention on biological diversity.

Tallurutiup Imanga/Lancaster Sound is teeming with life. The cold arctic waters foster birds, fish, and whales, forming one of the most unique ecosystems in the world; one that is both awe-inspiring and has sustained Inuit for thousands of years. The region is a place where the vibrant culture and well-being of Inuit are strongly tied to the land and sea.
Today marks a critical and important step towards the protection of this area for future generations.

“Protecting this area is critically important. Like most of the Arctic, the region is threatened by climate change. Rising temperatures and melting sea ice are shrinking habitats, and putting vulnerable sea life under pressure. Inuit, who for millennia relied on these species for food, clothing, and shelter, have found their livelihoods endangered and their futures at risk.
By protecting Tallurutiup Imanga/Lancaster Sound today, we are helping preserve a rich legacy for tomorrow. We are creating a buffer against the threats of climate change, and protecting against the stressors of human encroachment. We are implementing a sensible and integrated plan that will sustain biodiversity and sustain traditional ways of life.”

The Honourable Catherine McKenna,
Minister of Environment and Climate Change and Minister responsible for Parks Canada

“Our government is committed to protecting 5% of our marine areas by this year, and 10% by 2020; this national marine conservation area is a powerful step toward our goal. We are also implementing the Oceans Protection Plan, a historic, $1.5-billion investment that help our oceans stay safe and clean. Under this plan, we are expanding the Coast Guard Auxiliary in the Arctic, particularly through Indigenous participation. We look forward to continued consultation on this important project, which will see increased emergency response capacity in the Arctic and provide a meaningful opportunity for Indigenous communities to protect their marine areas for future generations.”

“The designation of this protected area is an important achievement for Nunavummiut, and one we should all celebrate. Inuit have always been guided by our societal value of Avatittinnik Kamatsiarniq, to respect and care for the land, animals, and the environment. As the stewards of our resources, it is up to us to find the balance between responsibly developing our resources and protecting and sustaining the land and the life it supports. I’m honoured to be part of this important step forward together.”

“Today is an important day for Inuit because of the profound significance of Tallurutiup Imanga to our communities. This area is the cultural heart of the region; these waters thriving with marine life have supported the lives of Inuit since time immemorial. For almost five decades, Inuit have strived to ensure these incredible resources continue to provide for our culture, our traditional way of life and our survival. Through the establishment of the Inuit Impact and Benefit Agreement, Inuit in this region will continue to benefit from this marine area and grow and prosper into the future.”

Quick Facts
 The combined size of the proposed NMCA in Tallurutiup Imanga/Lancaster Sound along with Sirmilik National Park, Prince Leopold Island Migratory Bird Sanctuary, and Nirjutiqavvik National Wildlife Area, will total more than 131,000 square kilometers – more than twice the size of Canada’s largest protected area (Queen Maud Gulf Migratory Bird Sanctuary). Together, the protected area will go from the very top of Sirmilik’s glaciers to the depths of the ocean in Tallurutiup Imanga/Lancaster Sound.

 The proposed NMCA in Tallurutiup Imanga/Lancaster Sound more than doubles the area of Canada’s marine protected waters, from 1.54% to 3.44%, and contributes about 1.9 per cent of Canada’s total marine estate on an interim basis towards the Government of Canada’s commitment to protect five per cent of marine waters by 2017, a contribution that will only be formalized at the conclusion of an Inuit Impact and Benefit Agreement.

 Inuit Qauijimajatuqangit (Inuit traditional knowledge) will inform future decision making for the management and protection of the NMCA. IQ is the passing of traditional knowledge and proven best practices amongst a people and the basis for survival in the Arctic. IQ has accumulated over hundreds of generations and the result is a collective knowledge bank of oral history that has allowed Inuit to gain insights and understanding of their environment.

 The protection of Tallurutiup Imanga/Lancaster Sound was supported, in part, by the efforts of the Nature Conservancy of Canada and Shell Canada’s decision to voluntarily relinquish 30 oil and gas exploration leases covering 8,600 square kilometers.

 The agreement also includes confirmation that, in addition to the moratorium on future offshore oil and gas exploration, no further exploration work, including seismic activity, will be permitted in the area while the IIBA negotiations are ongoing. Once the area is designated under the Canada National Marine Conservation Areas Act, the area will permanently prohibit the exploration for and exploitation of hydrocarbons, minerals, aggregates, and any other inorganic matter.

 Lancaster Sound is one of 29 marine regions that cover the full range of marine ecosystems found in Canada’s Atlantic, Arctic, and Pacific oceans, and the Great Lakes. Under Canada’s National Marine Conservation Area System Plan, Parks Canada’s goal is to establish NMCAs to represent each of the 29 marine regions.

 Tallurutiup Imanga/Lancaster Sound has sustained Inuit living a subsistence lifestyle for generations. Through the practice of traditional activities and harvesting that continue today, Inuit are able to feed themselves and their families while fostering a strong sense of cultural identity in all generations. The protection of this entire area is crucial for the health and vitality of Inuit in the High Arctic and is overwhelmingly supported by communities.

 The work of Inuit to protect Tallurutiup Imanga/Lancaster Sound began in the 1960s and 1970s and led to the first Lancaster Sound Regional land use plan in 1990. Today’s announcement is the culmination of decades of work by Inuit to promote and protect their interests in the area.