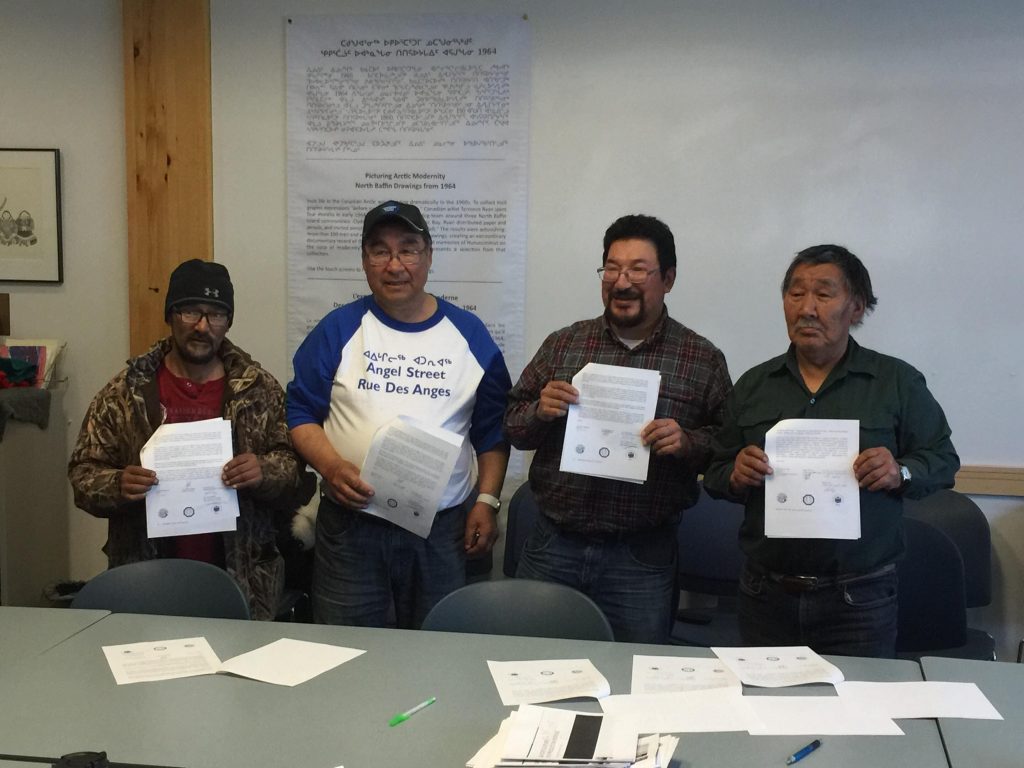 Representatives from QIA, Pond Inlet HTO and hamlet sign a letter to the Minister to asking for a review on the NIRB decision on Baffinland’s application for a production increase.

The Qikiqtani Inuit Association (QIA) is pleased with the review process and outcome on Baffinland Iron Mine’s application to the Nunavut Impact Review Board (NIRB) for production increase at the Mary Rive Project. However, QIA’s support for increased production is contingent on the mining company’s ongoing efforts to stabilize and improve upon the Mary River project and deliver on commitments to Inuit in the region.

In early 2018, QIA completed an extensive community engagement tour to provide project updates and to collect feedback prior to confirming a strategy to renegotiate the Mary River IIBA. 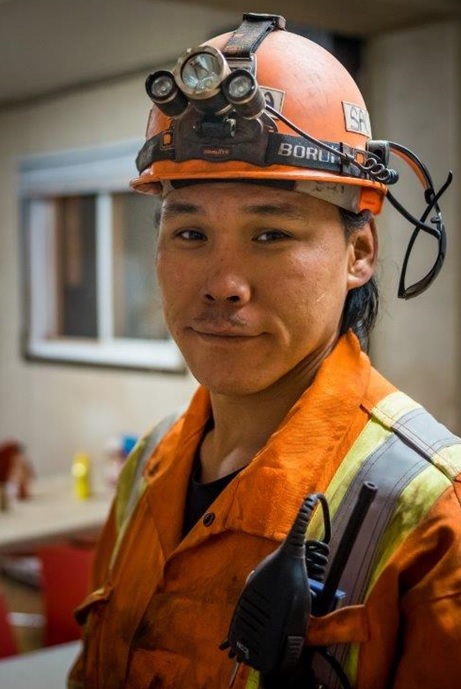 Based upon the feedback received from Inuit QIA developed and delivered a formal presentation to Baffinland titled “Adapting the Baffinland Approach: Gaining Inuit Support Through Prioritization of Inuit Interests”.

This presentation was delivered to Baffinland at a point in time when there was limited shared success related to the Mary River Project.  The parties had recently completed an arbitration process, Baffinland had filed yet another project modification request titled “the 2018 Production Increase Application.”

QIA had issued a Notice of Non-Compliance for failing to achieve Inuit content related to the 2017 Minimum Inuit Employment Goal, progress was lagging under the $20 million dollar Skills and Partnership Fund (Q-STEP). The result of QIA’s presentation to Baffinland was an agreement to undertake a “Project Stabilization Approach.”

The “Project Stabilization Approach” was formed to forefront Inuit interest in the project prior to addressing immediate corporate interests. It was also intended to reconstruct the relationship the project has with communities.

QIA pledged that it could only consider supporting the 2018 Production Increase Application if there was a consistent drive towards directly improving the lives of Inuit as a result of the project. QIA was no longer willing to accept inaction in key benefit areas such as Inuit training, employment, contracting and project monitoring and mitigation.

Under the Project Stabilization Approach parties accomplished the following activities;

The recent Minister’s decision to approve the 2018 Production Increase Application is a direct result of the work QIA and Baffinland have undertaken to address and advance Inuit interest in the Mary River Project.

QIA support for the 2018 Production Increase would not have been considered without a clear pledge of satisfaction and support by communities, namely Pond Inlet, and the results of Baffinland executing upon specific Inuit interests in the Mary River project.

Taken in totality, QIA believes the Project Stabilization Approach has resulted in improved outcomes for Inuit. QIA believes there are additional commitments and tools that will allow Inuit a stronger position to express their views and to see direct actions taken to advance such interests. QIA believes this work is a true expression of the intent of the Nunavut Agreement and the vision of improving the livelihood and lifestyles of Inuit. 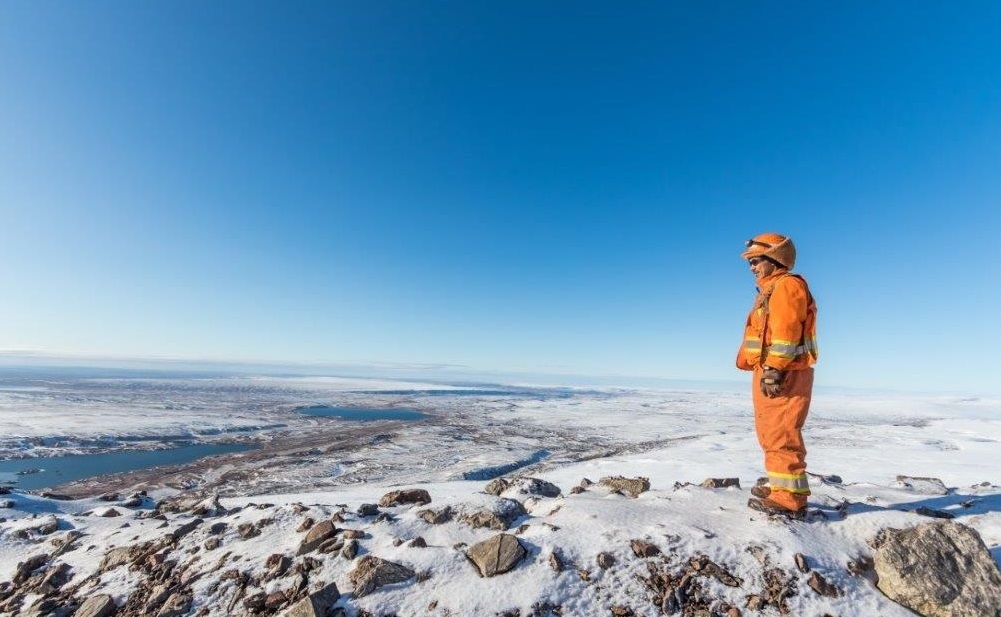 Baffinland has been trying to increase production in order to make the Mary River project financially viable. The mining company has stated that the project does not turn any profit.

During QIA’s review of the 2018 Production Increase numerous community meetings were held in Pond Inlet. QIA held workshops and meetings in March, April, June and July all in an effort to actively review the application and consider how to address the concerns raised by Inuit.

QIA committed itself fully to these activities.  During the NIRB led review process QIA was in regular contact with NIRB, QIA supplied NIRB with advice and support to host community engagement sessions and QIA presented three formal submissions to NIRB.

Upon review of the NIRB Report QIA believed there were elements and responses submitted in relation to the Production Increase Application that did not receive the full attention of NIRB, namely the monitoring and mitigation measures agreed upon between QIA the community of Pond Inlet and Baffinland.

Furthermore, QIA was aware that there were substantial benefits that had been negotiated in relation to the 2018 Production Increase Application which NIRB simply never received due to the timing of the formal review process.

Following agreement with the Hamlet of Pond Inlet and the Mittimatalik Hunters and Trappers Organization, QIA submitted a letter to Minister LeBlanc in September requesting that the Minister examine the evidence submitted during the review process broadly in context of balancing impacts with appropriate monitoring and mitigation measures. This letter was preceded by an earlier joint letter by QIA and the Hamlet and Mittimatalik Hunters and Trappers Organization to NIRB in July 2018.

QIA’s support for the Baffinland application is contingent on the mining company delivering upon commitments made to Inuit including expanding benefits to Inuit in the impacted communities.

On September 30 Minister LeBlanc declared his intention to reject the NIRB recommendation and accept the Baffinland production increase contingent on a number of conditions which are explained below. 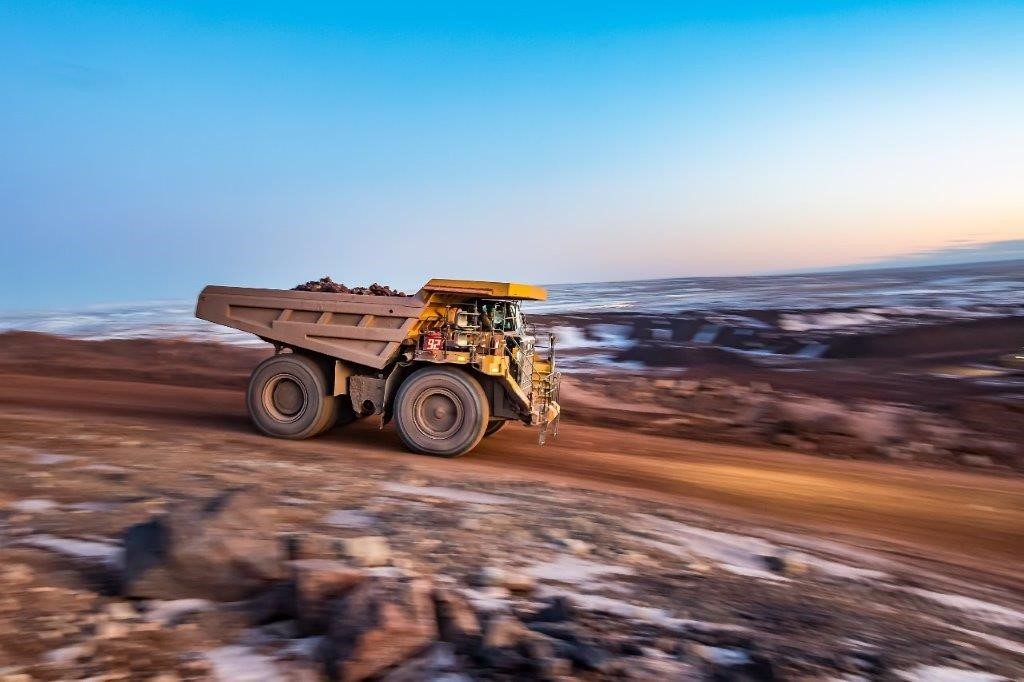 The NIRB process shows QIA that these institutions of public government, created under the Nunavut Agreement, serve a vital role in gaging the impact of development and mineral extraction in Nunavut. QIA is pleased to have been able to take part in this process to represent the voices of Inuit in the Qikiqtani Region, particularly the communities of Pond Inlet, Clyde River, Arctic Bay, Sanirajak and Igloolik.

QIA continues to be a strong advocate of NIRB. The work conducted by NIRB to review the 2018 Production Increase Application was commendable taking project review timelines into consideration. QIA is particularly please with the level of community engagement undertaken as part of the review. NIRB conducted community engagements with all the five communities impacted by the Mary River project.

QIA believes NIRB brought to light a number of important matters which require improved attention and action. Topics such as dust and marine mammals now have heightened monitoring and mitigation measures which the company had not previously committed to despite years of requests to do so.  QIA is committed to working on these important topics through continuing to engage in NIRB’s on-going monitoring of the Mary River Project.

This past year, QIA worked directly with the communities of Pond Inlet as well as Arctic Bay, Clyde River, Sanirajak and Igloolik to actively improve management, mitigation and delivery of benefits for Inuit related to Mary River. This included co-hosting the Annual Project Review Forum meeting which assess project performance and develops concrete recommendations on how improvement can be made to on topics most important to Inuit.

QIA has asserted that in order for the Baffinland project to advance, benefits and interests to Inuit must also advance.

QIA has received Minister LeBlanc’s decision to approve the Production Increase Application and believes this decision, when taken as a whole, represents an important transition in the Mary River Project. Specifically, QIA would like to highlight several conditions which Minister LeBlanc articulated when approving the production increase:

The combination of third-party audits and community based monitoring workshops sets a new standard for project oversight in Nunavut. This is an achievement that supports all parties interests. 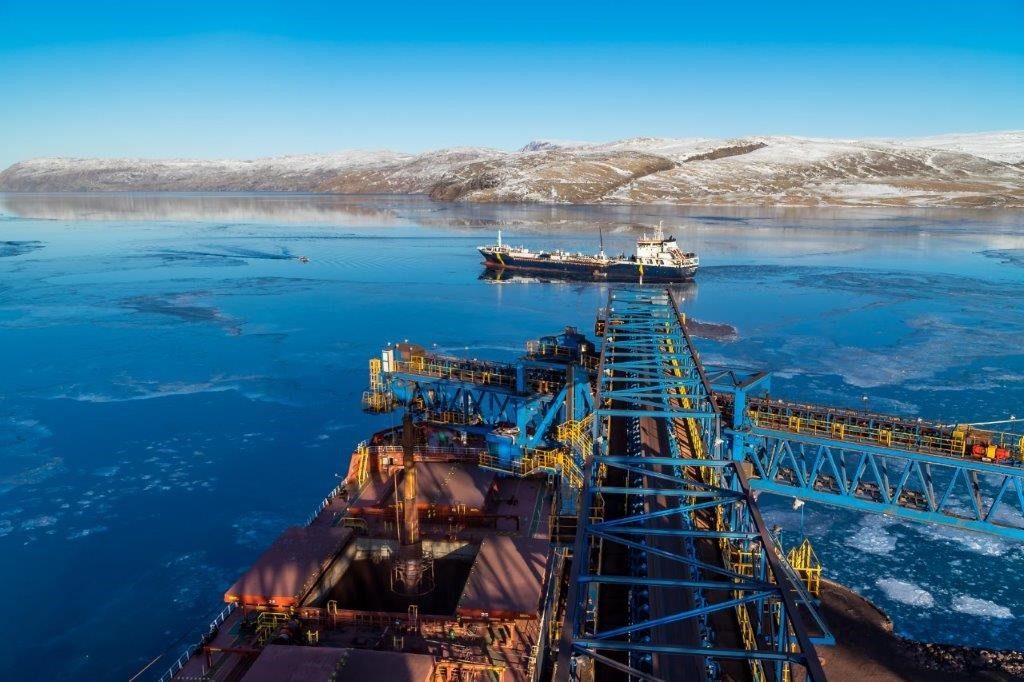 Specific to the 2018 Production Increase Application, QIA and Baffinland have negotiated an expanded Wildlife Compensation regime under the IIBA. This regime includes the following: