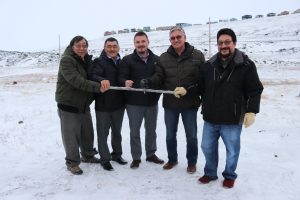 QIA President, P.J. Akeeagok and QC President and CEO Harry Flaherty and three members of QIA’s Executive, cutting a sealskin ribbon with an ulu to commemorate the signing on the Inuit Owned Land Lease in Iqaluit.

The proposed Nunavut Heritage Centre, among other big-ticket development projects in Iqaluit, has potentially taken one step forward with Monday’s announcement that the Qikiqtani Inuit Association and the Qikiqtaaluk Corp. signed a lease earlier this month to develop a 40-acre parcel of Inuit-owned land in Iqaluit.

Last February, the Qikiqtaaluk Corp., the QIA’s business development arm, first revealed its plan to build an entire neighbourhood of residential, commercial, industrial and recreational buildings and spaces in the large parcel, located along a one-kilometre stretch of Federal Road between the city centre and the North 40 area.

The QIA controls the Inuit-owned land, which Inuit hold in fee simple title through the Nunavut Agreement.

That means the project represents the first privately-led land development in Iqaluit, with QC building all infrastructure required for it, such as roads, water and sewer lines. The development is expected to cost between $300 million and $400 million.