Qikiqtani Inuit have long been united in the fight against tuberculosis (TB) in our communities. Today, as we begin to round the corner on the COVID-19 pandemic we have seen Inuit face this challenge together with care for each other and our communities.

Each of us know that our health is deeply affected by our conditions of everyday life. The same social and economic inequities that increase our risk of COVID-19 also increase our risk of TB.  The COVID-19 pandemic has illustrated the vital need for housing and access to health and social care across Inuit Nunangat.

QIA remains committed working together with Inuit, and the Governments of Nunavut and Canada to eliminate TB in our region and across Inuit Nunangat. Together we can eliminate TB and build a more just and healthy Inuit society.

On March 8, 2019, the Government of Canada apologized to Inuit for the management of the tuberculosis epidemic from the 1940s to the 1960s. That apology was a long time coming and signaled a step towards healing and reconciliation.

On March 23, 2018, the Government of Canada and Inuit Tapiriit Kanatami committed to eliminating TB across Inuit Nunangat by 2030 and reducing active TB by at least 50 per cent by 2025.

TB is caused by a bacteria called mycobacterium tuberculosis. People can become infected with TB by inhaling air that has TB germs in it, but not through physical contact or by sharing dishes or clothes. Once inhaled, TB bacteria can stay latent (not active) in the body for several years before causing TB disease.

TB is entirely preventable and treatable. TB screening is important because it protects you, your family and your community. Visit your local health centre for screening.

COVID-19 is a new disease that has not been previously identified in humans. It is part of a family of viruses (coronaviruses) that are a common cause of illness in people and animals. People can become infected by COVID-19 by inhaling air that has COVID-19 germs in it, by touching surfaces where droplets have landed and then touching their face, mouth or nose, or by physical contact such as handshaking, hugging or kissing. People can be infected with COVID-19 for up to 14 days before symptoms arise.

Learn more about tuberculosis from the Public Health Agency of Canada, and from the Government of Nunavut.

Learn more about COVID-19 from the Public Health Agency of Canada, and from the Government of Nunavut.

Some statistics on why Nunavut is vulnerable to TB and COVID-19:

There are many lessons we can learn from TB to apply to our work on fighting COVID-19. Here are some more facts about TB in Canada, Inuit Nunangat, Nunavut, and the Qikiqtani Region: 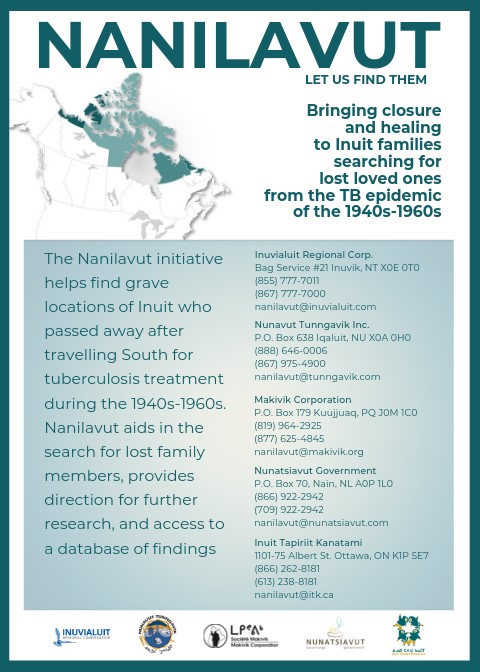