Arctic Bay’s Shawn Shappa and Dale Aola were traveling from Arctic Bay to Pond Inlet on snowmobile on Wednesday, January 6, typically a seven-to-12-hour journey, when something went wrong.

The pair had signed out a Spot device from the Arctic Bay Hamlet office that morning and left for Pond Inlet in the afternoon. 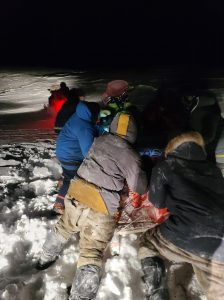 Two days later, no one had heard from the snowmobilers. Search and rescue teams left on Jan. 8 to look for the missing men. Two teams were dispatched, one from Pond Inlet and the other from Arctic Bay to search from both ends of the trail.

Despite their efforts, the men were still missing the next day and more help was needed.

That’s when Search and Rescue asked the Arctic Bay Nauttiqsuqtiit to lend-a-hand. At first the Nauttiqsuqtiit were asked to be on stand-by but by Jan. 10 they were needed to assist with the mission.

Niore Iqalukjuak, the community supervisor for the Arctic Bay Nauttiqsuqtiit, who has 15 years of experience with coordinating rescue missions, took over coordinating the efforts. Matthew Akikulu and Jonah Muckpa were tasked with going out on-the-land. 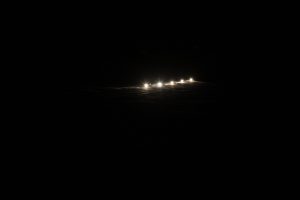 The Nauttiqsuqtiit, Matthew and Jonah, packed their qamutiik, got some food, and left on Sunday Jan. 10 at 3:30 p.m. to join the search and rescue team.

The conditions made searching difficult. The wind had blow snow on the trail, and it was hard to find tracks.

Luckily, Shawn and Dale, were finally able to send a message via their Spot device on Sunday. The snowmobilers sent the message at 1:30 p.m., but Debbie Johnson, Arctic Bay’s Senior Administrative Officer, didn’t receive it until 5:30 p.m.

The Spot message allowed the searchers to locate Shawn and Dale on a map. With the information on hand, rescuers were able to locate the men at 4:30 a.m. the next day.

Shawn and Dale had set up a tent, taking shifts sleeping. They were in good condition when found.

By the time the snowmobilers were located, Niore had been working for 16 hours straight, communicating between the Pond Inlet and Arctic Bay search and rescue teams.

It was all “kind of tiring,” he said. 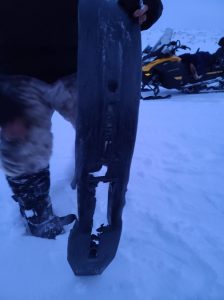 Shawn’s snowmobile had broken down, which is why he and Dale needed to be rescued. One of his skis was completely worn out.

The searchers returned to town with Dale and Shawn on Monday Jan. 11. They were greeted by a welcome party.

This was not the Nauttiqsuqtiit’s first rescue mission. They’ve helped with two other searches in Arctic Bay, along with assisting other communities with search efforts.

As stewards of Tallurutiup Imanga, the Nauttiqsuqtiit monitor sea ice conditions for safe passage and lend a hand to search and rescue efforts in the community, using their knowledge of fellow community members and the local landscape to help rescue Inuit in need.

In July 2018, Qikiqtani Inuit Association launched the Tallurutiup Imanga Nauttiqsuqtiit pilot program in Arctic Bay as an early benefit of the National Marine Protected Area. The program has since been extended to all five Tallurutiup Imanga communities. 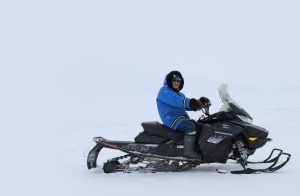