Blog: An Update on the Qikiqtani Truth Commission Initiatives

Blog: An Update on the Qikiqtani Truth Commission Initiatives

For years, the Canadian government rejected Inuit calls for a public inquiry into colonial practices that radically changed the Inuit homeland and traditional ways of life.

To gather its own account of what happened to Inuit, Qikiqtani Inuit Association established an independent truth commission focusing on the years 1950-1975. Almost 350 witnesses, mostly Inuit, participated through public hearings to uncover the truth about forced relocation and family separation, killing of qimmiit, and other events that changed their lives.

After a decade of work, QIA publicly released the full set of Qikiqtani Truth Commission reports in 2013, including the QTC Final Report: Achieving Saimaqatigiingniq. The final report distills three years of interviews, testimony, and research about the experiences of Qikiqtani Inuit between 1950 and 1975.

As a response to the first recommendation from the report, QIA immediately set to work lobbying the federal government. First, by presenting the reports to the prime minister, key cabinet ministers, and leaders of the opposition parties. This was followed by several years of concentrated effort and focus on receiving an acknowledgement and apology for the killing of qimmiit. The next major milestone occurred in 2017 with the establishment of the Inuit Crown Partnership Committee. This Committee signaled major change was on the horizon. 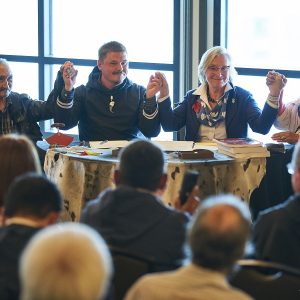 On August 14, 2019, the Government of Canada responded to one of QIA’s calls to action and formally acknowledged and apologized for modern-day colonial practices imposed on Inuit in the Qikiqtani Region between 1950 and 1975.

Building on the work of the Qikiqtani Truth Commission, QIA has acted to strengthen Inuit governance and culture and support healthy communities. To move towards saimaqatigiingniq, QIA has negotiated an Agreement with the Government of Canada. Initial investments in the Agreement included:

As part of the Agreement, the Federal government has provided QIA with an initial contribution of $15 million toward QIA’s vision of establishing a Saimaqatigiingniq Fund. Money received by QIA will be invested for the purpose of funding Saimaqatigiingniq programs.

Although not part of the final QTC recommendations, QIA Board of Directors felt that it was imperative that QIA deliver programming which supports qimmiit revitalization.

The Qimmiit Revitalization Program launched in 2020, and to date has been focused on the following projects:

One of the first areas of action for the Qimmiit Revitalization program was to get to know our audience. We knew there were qimuksiqtiit in most of the Qikiqtani, most notably in the North Baffin because of the annual spring dog team race – the Nunavut Quest.

QIA staff estimated there might be around 45 qimuksiqtiit in our region. When the Qimmiit Revitalization Program coordinator began contacting each of them to confirm if they were still active with dog teaming, she obtained other useful information such as:

In October 2020, with the launch of the Qikiqtani Qimuksiqtiit Project (QQP), QIA learned that are 63 active qimuksiqtiit in the region. This number is growing.

The QQP provides financial support to Qikiqtani Inuit dog team owners, to build and strengthen their dog teams and cover costs related to their qimmiit. The QQP is a three-year project which will run until March 2023.

As part of the Qimmiit Revitalization Program, QIA committed to provide $100,000 each year to Nunavut Quest for seven years. Nunavut Quest was cancelled in 2020 and 2021 because of the COVID-19 pandemic. While there was no formal race the past two years, the Nunavut Quest funds remain committed and will carry forward. As a show of support and ongoing commitment to this event, in 2021 QIA provided money to all registered dog team racers to help cover costs associated with preparing for the race.

Since the signing of the Agreement on August 14, 2019, QIA has been engaging with other agencies to discuss the need for programs and materials to educate Inuit and other Canadians about our history. This includes educational materials about the Qikiqtani Truth Commission.

On June 4, 2021, the Government of Nunavut and QIA signed a memorandum of understanding to create educational resources grounded in Inuit culture and language. These resources will help to strengthen cultural identity and Inuktitut language skills for preschool-aged children, K-12 students, and adult learners.

“This agreement represents a significant step in QIA’s continued efforts to revitalize Inuit culture throughout our region,” said QIA President P.J. Akeeagok. “We look forward to working together with the Department of Education to ensure a bright future for Inuit children.”

QIA is working with the Government of Nunavut to help Inuit language, identity and culture thrive in our communities.

Under the Travel and Healing Program, QIA will work with families impacted by the Dundas Harbour relocation, and the closing of Kivitoo, Padloping, and South Camp to develop site visits and healing programs.

While COVID-19 has impacted our progress on some Saimaqatigiiniq programs, QIA is actively working to complete the Qikiqtani Truth Commission program delivery team. We are actively recruiting program coordinators so that we can build momentum for programming planned for History and Governance and Travel and Healing programs.

About the Qikiqtani Truth Commission