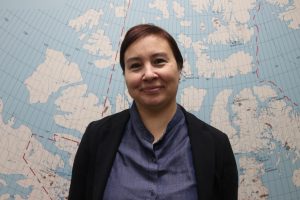 Iqaluit, Nunavut – January 4, 2018 – The Qikiqtani Inuit Association (QIA) is conducting engagement with five Qikiqtani communities on the Inuit Impact and Benefit Agreement (IIBA) that will lead to the creation of the Tallurutiup Imanga National Marine Protected Area.

The open houses will be an opportunity for QIA to get feedback on the Tallurutiup Imanga Inuit Impact and Benefit Agreement and to gather insights from communities on what should be included in this agreement.

The Tallurutiup Imanga IIBA is scheduled to be negotiated with Parks Canada by March 2019.

The public community engagements will include a short presentation followed by a community celebration and performance led by Qaggiavuut’s Natashia Allakariallak and Jerry Laisa.

There will be refreshments and draws for door prizes where participants can win gas and grocery cards, sealskins, book, music packages and much more.

In the afternoon before the public performance the Qaggiavuut artists will lead children’s workshops in each community.

We have a packed day of activities in each hamlet:

9:30am to noon –meeting with the hamlet council and HTO members

These dates/times are subject to change due to weather/mechanical issues.

Sandra Inutiq is the Chief Negotiator for the Qikiqtani Inuit Association’s Tallurutiup Imanga Inuit Impact and Benefit Agreement. Inutiq received her law degree from Akitsiraq Law School in 2005, in 2006, she became the first Inuk woman in Nunavut to pass the bar exam. In the past, she has worked as legal counsel for the Government of Nunavut, as the Director of Policy for the Office of the Languages Commissioner and served as the Official Languages Commissioner for Nunavut. Most recently, she worked for the Tides Canada Foundation as a Senior Associate for Inuit Nunangat.

Inutiq has lived in various communities in Nunavut. She spent her childhood in Kangiqtualuk outpost camp and Clyde River, in her youth she moved to Iqaluit, where she now lives. After graduating high school, she attended Nunavut Sivuniksavut, an Ottawa-based college program that teaches Inuit history. After Nunavut Sivuniksavut Inutiq returned to Iqaluit and took on a paralegal training position with Justice Canada. She then worked for Corrections with the Government of Nunavut, serving youth, before returning to school for an undergraduate law program at Carleton University.

Natashia Allakariallak is an Inuk singer/songwriter and actor from Iqaluit, with roots in Resolute Bay, Igloolik and Nunavik. Natashia is a vital member of the Kiviuq Returns cast.

Born to a family that was the last to move from traditional camps to the town of Pangnirtung, Jerry Laisa is a young Inuk artist. In the summer of 2017, Jerry was one of two Nunavummiut who acted, sang and danced in the Confederation Centre’s production of The Dreamcatchers. Jerry is now working at Qaggiavuut as a youth performance facilitator, an actor in Kiviuq Returns and training in multimedia technical work.